The Skee ball game fits people of a wide range of ages. Besides, the game suits a varied range of settings. That includes bars, public arcades, homes, and colleges.

Since its inception at the beginning of the twenty-first century, it has interested many people. However, its rules haven’t pretty much changed since then.

What Do You Need to Play the Skee Ball? 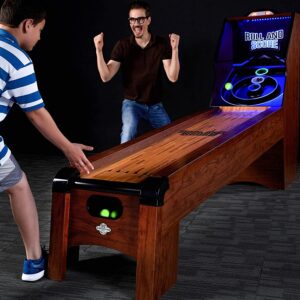 For you to play the game, you need the skee ball machine. The skee ball equipment has a table-like ramp surface with sidebars on either side. Also it has a polished surface that supports the smooth rolling of the ball.

A standard skee ball table is 13 feet long. However, shorter tables that fit small rooms exist. At the far end of the table is a sudden angled ramp of about 8.5 centimeters and angled at 40 degrees.

The ball hop (sudden ramp) leads to another angled surface with holes worth different points. The values range from 10, 20, 30, 40, 50, and 100. The largest hole that’s easy to reach, earns less points. Each hole has a return path for channeling back the ball for easy access.

Other skee ball machines have the scoring display. That means every time a player scores, it lights up and displays the points the player has accumulated.

So How Do You Play the Game?

Skee ball game is easy to play. However, you are more likely to meet challenges at the beginning. You start by inserting the predetermined money into the machine. Better still, other models have modifications to accept even credit cards.

Having paid the required amount, you press a button, and the system releases for you nine balls in a queue for a game. The balls are usually of heavy plastic or polished Masonite material.

Your next move is to pick the first ball in the queue and roll it on the ramp while aiming for a score. Note that throwing or bouncing the ball towards the target isn’t allowed.

For that reason, there are some skee ball machines with a net coerig the rings. That way a player can’t throw a ball directly into the loops. The closest and the easiest to reach target is the hole that rewards 10 points.

How to Score in a Skee Ball Game

The object of the game is to roll the ball and enter it into one of the loops. So you score points if the ball successfully rolls into any of the loops. And you have nine balls to make up a game. If in each roll of the ball you miss the rings, you earn zero marks.

So the challenge arises from the difference in the ring diameters and their distance from the throwing point. Bigger holes are closer to the player but smaller diameter loops are up high. And the smaller the ring, the more marks it earns you.

If you can score into the 50 point ring consistently nine times, you get 450 points. Therefore the challenge is to earn the highest point in each roll. And that requires some skills to master.

At the end of the frame, the system awards you tickets depending on the points you earned in the game. However in case, the machine doesn’t have the automatic score display, you’ll have to keep track of the scores for each player manually. 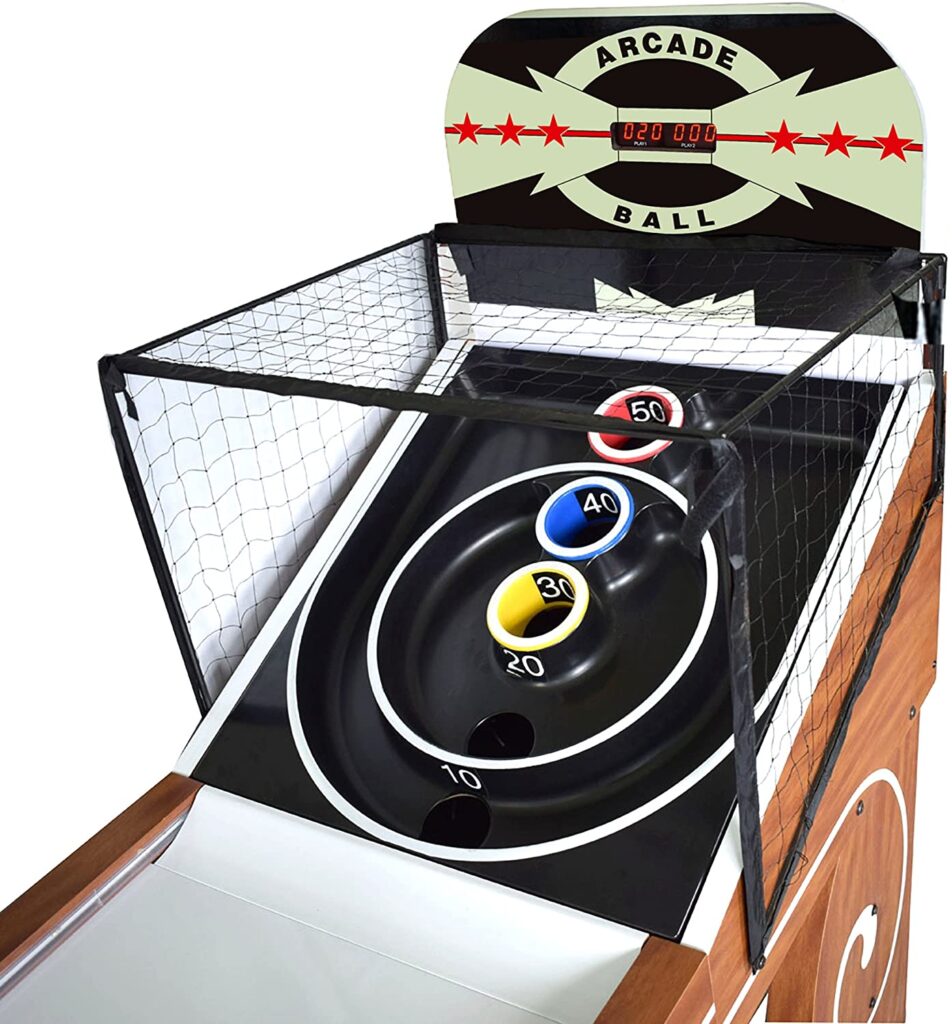 You can play the game for fun as an individual or two persons. Also, you can form teams and compete against each other. So there are minor variations of the rule depending on where and the competition level of the game.

However, here is a quick overview of the usual rules:

Before embarking on playing a skee ball game, know the full arcade or bar rules.

Tips for Improving Your Scores in the Skee Ball Game

The game may appear straightforward to win, but it isn’t. So, reflect on the following tips to increase your chances of earning more points in the game:

Remember, the skee ball table isn’t flat but inclined at an angle. So to get the right view and approximation of how far you have to roll the ball into a loop, you need to bend slightly. However, kneeling is wrong as it won’t allow for free movement of your arms.

Take the Correct Stance and Maintain It.

You must assume the correct stance in readiness for rolling the ball. And once you have found the right spot for your legs, maintain it. In other words, your stay consistent with the stance that works for you.

Among the rings at the center, the 40 point hole is the second highest. Remember, the 50 point loop is at the topmost and smallest in diameter. When you aim and miss it, you can either land the 10 point ring or even earn no marks.

On the other hand, the 40 point loop is an easier target. Moreover, an overthrow might land you into the next hole above it.

Frequent practicing of the game helps sharpen your skills. With time your coordination between different parts of the body improves. Accordingly, you’ll find yourself scoring high points often.

The skee ball game is a great for killing boredom and cheering up a family. Whether at home, in college, or at a party, it still becomes a viable game. Even your kids will love it. So are you ready to give it a try? 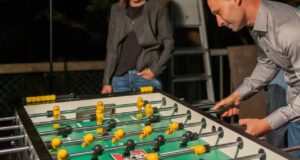 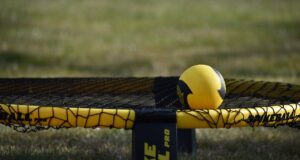