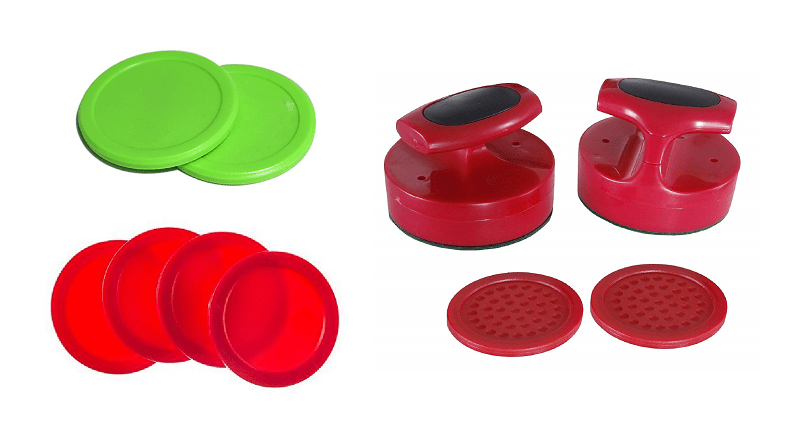 If you’re an air hockey enthusiast, you must be familiar with the difference that a new set of pucks can bring to a game. Since air hockey pucks are prone to wear, they often need to be replaced for smooth, even play.

The entire sport of air hockey depends on a smooth-gliding puck that needs to be heavy enough to avoid flying off the table while being light enough to avoid getting stuck midway. Some of the best air hockey pucks are compiled here for your convenience – among these top-rated items, you are sure to find a set that suits your requirements.

If you need some unconventional air hockey pucks along with a pair of classic round ones, the Billiard Evolution 5-puck set is the way to go.

The set consists of two octagons, two round pucks, and a triangle, sized appropriately at 2.5 inches in diameter for any home-sized air hockey game. The octagons and triangular puck make air hockey more fun by making the game unpredictable – unlike the usual round pucks, you never know which direction they’re going to take upon impact. This adds more fun to the game.

If you have a table that’s on the larger side, though, you may find these pucks a tad too small. They’re also not meant for forceful play. Some customers complain they are too light and may fly off the table upon impact.

Basically, the octagons and triangle provide an interesting twist to the game, but you should steer clear of this one if you’re an enthusiastic air hockey player – these pucks aren’t made to stay on the table when forces are high!

This is a 4-puck set of medium-sized round pucks that are 2.5 inches in diameter. Like the Billiard Evolution pucks that were previously discussed, the Super Z Outlet Home Air Hockey Puck Set is meant for home-sized tables.

At 13 grams each, these are a bit heavier than the Billiard Evolution pucks. There are still some complaints of the pucks flying off the table, so a heavier set would do better if you’re used to more intense gaming.

Overall, these are better than most other pucks available in the market and are available at a fair price. Although you can’t expect any extraordinary durability or action, these can work good enough on at-home air hockey tables.

This pair of air hockey pucks come from one of the leading manufacturers of commercial-quality air hockey gaming accessories. The Dynamo Air Hockey Pucks can be ordered in two colors, and have two options for size as well. They’re a good choice if you have a large table with powerful airflow.

Available in green or white, the green pucks are meant for fast, loud games while the white ones are slower and quieter. You can order pucks of 2.5-inch diameter, or ones having a diameter of 3.25 inches. You can even order one white and one green puck – this particular package is for two pucks, whichever you want from the options.

With their weight, you don’t have to worry about them flying off the table very frequently. Instead, the weight has annoyed some customers who blame it for the pucks not being as fast as they would’ve liked.

Overall, the Dynamo pucks do well on large air hockey tables with good airflow. Their weight calls for a stronger gliding force to keep them moving.

If you’re going for a complete set of two strikers and two pucks, the Hathaway Pro-Series Set could be a good choice.

The bright red strikers come with a felt base and a user-friendly, ergonomic design. With their 4-inch diameter, they’re the perfect size to hold comfortably during air hockey matches.

This set is durable as far as chipping is concerned. Customers seem pleased with the material of both the strikers and the pucks. However, the 2.5-inch pucks are quite lightweight which may cause them to fly off the table during games.

Overall, the majority of positive customer reviews make this striker and puck set worth a try.

The simple round appearance of a conventional air hockey puck can be quite deceiving. Apparently, it’s just another gaming accessory you need to buy randomly.

However, not all pucks are created the same, just as not all air hockey tables are made the same. You need to make sure if the puck you’re buying will actually be compatible with your table.

There are quite a few things to consider when buying an air hockey puck to make sure it goes with your table, such as:

Usually, a 7 to 8-foot air hockey table should be able to work with a 3.25-inch puck weighing up to 42 grams. Avoid getting a too-small puck for a full-sized table. It will only keep flying off during your game since a stronger blower is likely to be present on a larger table.

2.5-inch pucks weighing up to 30 grams should go well with 5 to 6-foot air hockey tables. For tables measuring 4 feet and less, small, light pucks of 1.25-inch diameters and 9 grams weight can suffice.

Your table will likely have a specification of the desirable weight of the puck. Find it out and choose your puck accordingly.

These can often predict well whether a product you’re about to buy is actually worth the purchase. Customer reviews can give you an idea about durability, and if there are any issues people face with the product in question.

Low-quality pucks are often prone to chipping and may have rough surfaces that may slow down your game. Reviews by previous buyers usually mention such flaws. Steer clear of such products to avoid unnecessary hassle.

More often than not, air hockey pucks that are being sold in bulk are valued cheaper. If you’re someone who likes vigorous air hockey games and needs to replace your pucks often, you can opt for a batch of multiple pucks rather than just a pair. It’s always good to have extras.

To ensure you get the best air hockey gaming experience possible, getting an appropriate paddle or striker (mallet) is worth considering too. Professional air hockey rules have a size and weight limit of the striker, i.e. a maximum diameter of 4 1/16 inches and a weight of 6 oz or less.

In most cases, your air hockey table manufacturer will be able to provide the most suitable striker for your table type. If you aren’t satisfied with your manufacturer’s offering, here are the two main types of air hockey paddles to choose from:

Designed for commercial-grade play, professional air hockey mallets are often made to be prevent scratches over your table surface. These are usually 4.5 ounces heavy and around 4 inches in diameter.

While they are more durable, they may not me the best choice for smaller home tables which use lightweight pucks. It’s better to go for a commercial-style striker if only your table is 7 to 8 ft long.

Mini air hockey paddles can be a good choice for smaller tables of 6 ft or less. These often have 3-inch diameters, making them suitable for children as well. Coupled with a lightweight puck, beginner mallets can ensure smooth gameplay especially for kids’ gaming tables with light airflow.

Once you have one of these best air hockey pucks in hand, it’s time for some serious action on the table. Get scoring and enjoy the smooth glide of a new puck as it is pushed around.