Owning an air hockey table can be an exciting prospect, but one should always make an informed purchase to be able to properly enjoy it.

Among the many kinds and brands of air hockey tables available out, there are the two Rhino Air Hockey table models.

The Rhino brand, though not much known itself, is owned by the widely popular company Escalade Sports which is also the parent company of gaming table manufacturers like Harvard and Atomic.

The performance of Rhino air hockey tables can, therefore, be expected to be similar to the products of these brands.

Though probably not fit for tournaments, Rhino tables can still offer good gameplay.

This large table by the Rhino brand features an overhead scoring system and is able to accommodate 4 players at once, thanks to the large playing field.

The black and grey colored table has a smooth white playing field that resembles ice hockey, with basic red graphics.

Instead of the usual PVC surface that is present on other air hockey tables, the Rhino 8-Foot has a Formica surface, so you can expect it to be more durable.

The overhead electronic scoring system can be customized according to your preference – activate the sound effects if you want, or set the timer for a limited game. Alternately, turn it off if you don’t wish to keep score.

The aluminum side cushions prevent damage from impact forces made by pucks and strike bats.

With its sturdy legs and rigid, heavy-duty construction, you can expect the Rhino 8-Foot Air Hockey Table to withstand forceful play by aggressive gamers.

Its 270-pound weight makes it hold up against intense matches where sturdiness is key.

Another sturdy, heavy-duty product of Rhino, the 7.5-foot air hockey table can also accommodate 4 players like the previously discussed model. It comes with 4 pucks and pushers each.

Having big construction and small, rigid legs, it’s quite a task to move the Rhino 7.5-Foot Air Hockey Table once assembled. This means it can withstand forces from aggressive air hockey matches with ease.

The stable, strong airflow from dual motors is meant to make the puck glide smoothly. However, dragging of the puck is still a common customer complaint. For this, furniture polish may provide a solution.

Although it has an aluminum rail surrounding its smooth playing field, an automatic scoring system with sound effects, and leg levelers to ensure balanced play, the black and blue table has mixed reviews that suggest it may not be the best choice.

It is evident when it comes to air hockey tables that Rhino isn’t a much sought-after brand, although they can provide a decent game of air hockey to those willing enough to give them a chance. 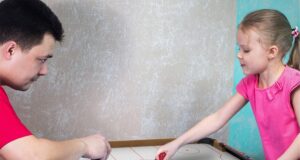 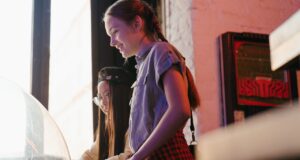