Air hockey is an exciting game and is soon picking up as the mainstream sport.

It’s a game that even kids love to play since they have the general know how on the game. But do you know that like all games air hockey has its rules and guidelines to be followed?

So if you wish to play your opponent the professional way you’ve got to know the rules.

The guidelines as laid out by the Air Hockey Association and Federations define how to start the game and how to establish a win.

So here is a quick round up on how to play air hockey;

All games require a referee, and air hockey is no exception. However, lack of the referee wouldn’t stop the game.

To determine who kick starts the game, you have to toss a coin. The winner of the toss gets the chance to choose any side of the table he wishes.

The second toss of the coin is then carried out to determine who begins games 3, 5, and seven while the other player takes over games 2, 4 and 6.

Faceoff or the first game

The thrill of the game begins in the first game. The puck is positioned on the center line by the referee. The players have to be at least an inch from the puck.

The referee makes the countdown As soon as the count down is over, and he lifts his hands off the puck, any player is free to push the puck.

And that marks the beginning of the game. Every player is allowed to smack the puck with any side of the mallet.

However, at all times the player and his mallet must not cross the center line. Otherwise, he is free to back off from the table, to move left or right.

At the same time when your opponent smacks the puck to your side, you have a maximum of seven seconds to hit back.

When either of the players scores the person who gives in to the goal gets to possess the puck. Then at the end of each game, you have to swap over with your opponent.

But how do you score a point?

On each side of the player is a goal. To score a point the pluck has to cross over and rest in your opponent’s goal. Meaning if it bounces in and out then it isn’t counted by the referee as the goal.

So what determines the end of the game?

Usually, a game in air hockey is determined when a player scores seven points. However, before commencing the game, you can set the scores that decide the game.

But you can also play the tournament style; competing for the best of seven. In that case, the player who wins four games becomes the winner of the tournament.

What’s the time out duration?

After conceding a goal, you have a maximum of 10 seconds to hit the puck and carry on with the game.

What if the puck is on the center line?

When the puck is positioned precisely on the center line, any player has the privilege of smacking it.

Each game has its boundaries that define a foul. What about air hockey?

Here are the common incidences that define afoul. The fine for the foul is giving over the next serve to your opponent.

The above are only the simplified rules for air hockey. If you need the rules that govern the real tournament, then visit air hockey official site.

When you know the rules and abide by them, air hockey becomes very interesting. So do you like the game? 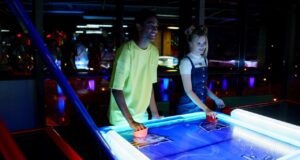