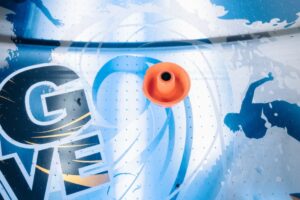 Air hockey is a thrilling sport in different parts of the world. The game fits both adults and kids. One of the key features that make the game interesting is the speed of the puck.

So How Fast Does An Air Hockey Puck Travels?

The velocity of the air hockey puck depends on several factors. That includes smoothness of the table, air holes condition, applied force, and the condition of the hockey puck.

However, with that said the air hockey puck can attain a speed of about 80miles per hour.

Matching an Air Puck With An Appropriate Table

Air pucks differ in weight and size. Large air pucks have high weights than smaller versions. So large and heavy pucks require large tables meant for adults. That’s because the amount of airflow on the large tables is sufficient to lift the heavy pucks.

At the same time using smaller pucks on kid-size tables gives better performance and speed. The minimal airflow is only enough for such lightweight pucks.

The air flowing through the holes helps lift the puck. By so doing it minimizes the friction between the puck and the table.

And you can only get the maximum speed when the blower pushes sufficient air volume to lift the air puck.

Condition of the Holes

When that happens it inhibits the amount and speed of the air passing through the holes.  Therefore to reap maximum speed of the puck, you have to ensure that the air holes are clean and free from any blockage.

The amount of force a player injects into the puck determines its speed, according to Newton’s third law of motion.

So assuming other factors are constant, a greater amount of force gives the puck high speed. And so most air hockey players employ full arm swing to inject maximum force.

Condition of the Table

The air puck floats on a thin cushion of air on the table. And therefore the cleanliness of the table’s surface counts. Accumulation of dust and other obstructing objects limits the puck’s speed.

Hence it is vital to keep the table clean. Wiping the table’s top surface and covering it when not in use is necessary.

It’s important to ensure that the table remains in its top condition. Check on the parts that require lubrication and do so periodically.

Also, polish the table so that it maintains a slicker texture. You can consider using a silicone lubricant spray too.

A smoother surface means minimal friction and thus a higher speed of the puck.

Owing to the constant play and friction, the pucks wear out bit by bit. In the long run, they can wear out by a significant amount hence limiting their performance. From time to time check on the condition of your pucks and replace them when necessary.

Air hockey pucks can assume different materials. That includes rubber and plastic material. And, the coefficient of friction between the two materials differ. A puck made from plastic is smoother and thus more likely to register high speed than rubber.

A fast-paced air hockey game is the want of every player. Fortunately, with the above tips, you can improve its speed and make the game more hooking.

Therefore how fast does an air hockey puck travel? Yes, it can attain even a speed of 80 miles per hour.

It’s all about the condition of the table, the air puck itself, and the amount of force the player applies.